In the workshop 9, we will use the 2012 Australian Survey of Social Attitudes (AuSSA). Open the 2012 AuSSA for this workshop. The data file is in your SSCI2020 folder.

This workshop introduces how to produce crosstabs and how to conduct the Chi-square test of Independence.

Suppose that we are investigating whether there is an association between gender of respondents (sex) and attitudes toward traditional gender roles (hubbywk). hubbywk measures the extent to which respondents agree or disagree with the statement that a man’s job is to earn money, and a woman’s job is to look after the home and family. We hypothesise that gender would influence the attitude toward traditional gender roles. Therefore, we think of gender as an independent variable and the attitude as a dependent variable. 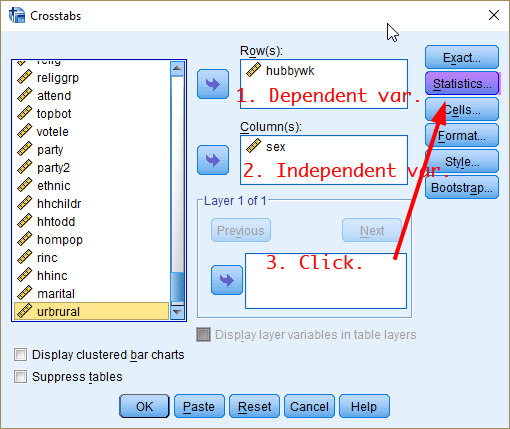 In the box of Crosstabs: Statistics, 1) tick the box of Chi-square. Then 2) Click Continue. 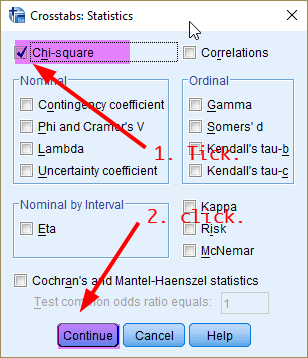 In the previous window (<Figure 1>), click Cells. In the box of Crosstabs: Cell Display, 1) tick the box of Observed under Counts and 2) the box of Column under Percentages (which will show the column percentages). 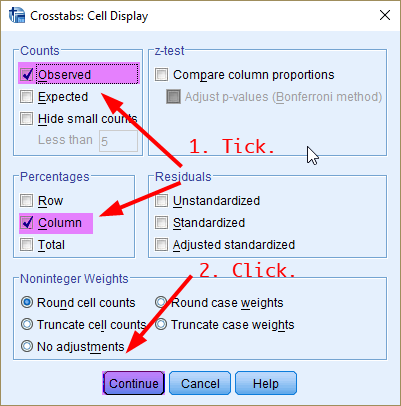 In the previous window (<Figure 1>), click OK. This will show a crosstab and its Chi-square statistic. 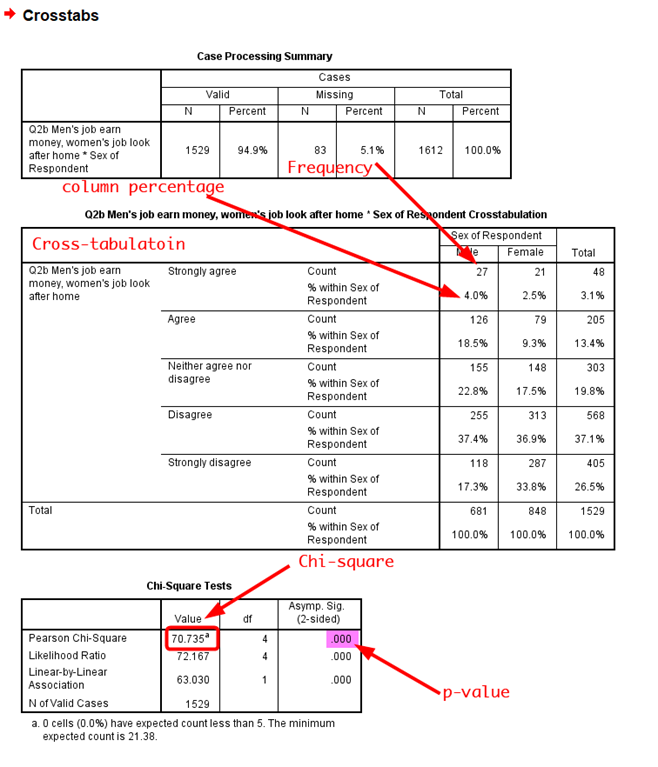 In <Figure 4>, the first table shows a summary of valid cases and missing cases. The second table shows the crosstab of attitudes toward traditional gender roles by gender. Each cell shows frequencies and their column percentages. Note that column percentages are computed within a specific column (in this case, within a category of gender). The third table displays a Chi-square statistic and its associated p-value.

Based on <Figure 4>, how would you describe the association between gender and attitudes toward traditional gender roles? Do you think this association is statistically significant? And explain why? If you are not sure, please see week 10 lecture slides.

When you examine bivariate association using a crosstab, it can be very daunting if your categorical variable has too many categories, or you are using a continuous variable. The best solution for this case is to recode variables (e.g. combining similar categories) so that you can have reduced numbers of categories (but the reduced categories should be still theoretically meaningful).

In this week workshop activity (Workshop Activity 9), you will use Education, Age, and Class as independent variables. Education (degree) is an ordinal variable with seven categories, but you do not need such detailed categories when you examine the relationship using crosstabs. Also, Age and Class are continuous variables, and thus categorising these three variables is necessary for the crosstabulation analysis. 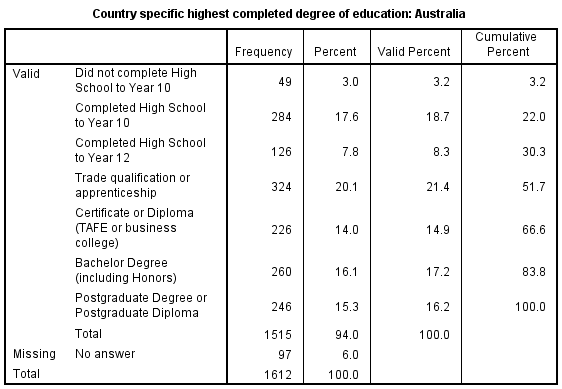 Second, make a recoding scheme for your new variable. <Figure 5> tells you that there are seven categories in degree. How would you recode this variable? There is no hard and fast rule for which categories should be combined. But there are two rules of thumb which could help you to make a decision.

All these rules considered, the following recoding scheme of <Table 1> is proposed. To make a recoding scheme like this table by yourself, first you need to check specific values that are assigned to each category. You can do so by clicking the Values column of variables in the tab of Variable View as in <Figure 6> or looking at the codebook of your dataset. 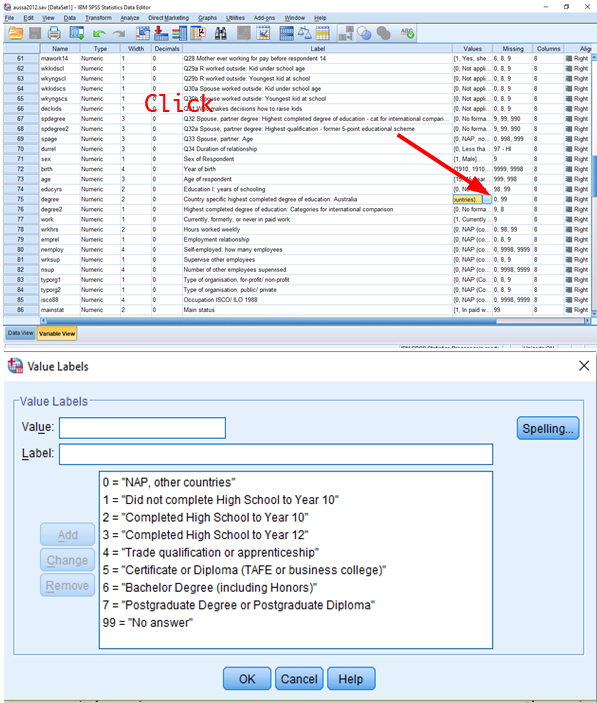 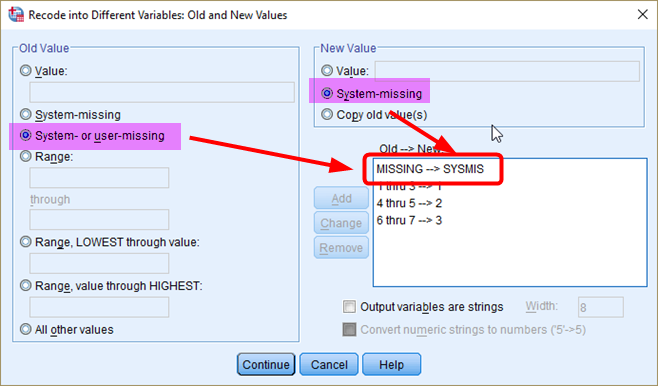 You already know this process. So I will not go into the details. However, I want to make sure that you should always provide the coding scheme for how missing values are treated. It is always best to choose the “System-” or “User- missing” (MISSING) to “System-missing” (SYSMIS)!!! In <Figure 6>, there is a category for 99 (No Answer). “No Answer” is assigned to 99, but this value is defined as missing values by users (Check the column of Missing). On the other hand, a system-missing happens when no information is available. “.” is used for showing system-missing (See <Figure 8>). If you do not include user-missing but include only system-missing in your recoding scheme (such as SYSMIS –> SYSMIS), then user-missing values such as 99 will be treated as valid categories (or values) in your newly recoded variable, which will ruin your subsequent analysis. In sum, always include “MISSING –> SYSMIS” when you recode variables. 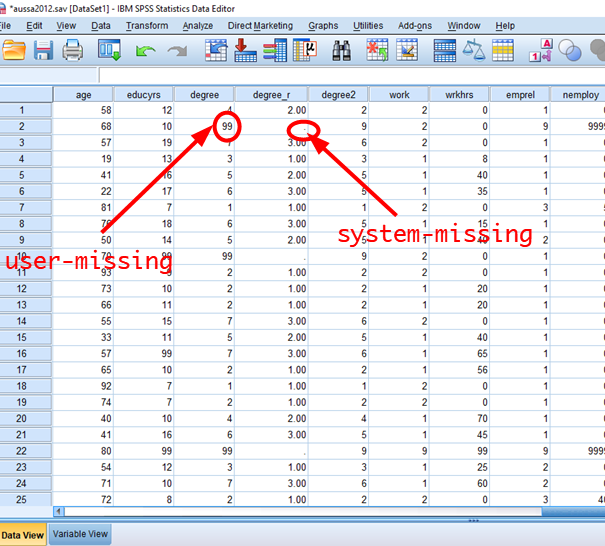