9.3 Introduction to Statistics and Univariate Analysis

When we use maths for social sciences, we generally use it in one of two ways:

1. Descriptive statistics: two numbers that are as good as a million

In this section, we will learn about descriptive statistics.

The main purpose of descriptive statistics to summarise a group.

This summary helps us turn a unwheldy set of numbers into one or two: a central tendence, and some indication of variable.

One example of using descriptive statistics is calculating the the median personal weekly personal income of people aged 15 years and over (which is $662) of the 23 million Australian’s who did the 2016 census. We get one number - $662/week - to represent 23,000,000 numbers.

As mentioned, the most common type of descriptive statistics try to summarise the “centre” of a dataset (or more correctly, the centre of the values of a variable). We call this ‘the central tendency’ of the data. The most common example of this is the average - formally called mean - of a set of numbers.

Other measures of the central tendency are the median, and the mode. Box 1 provides definitions, uses, and examples.

We know from life, however, that the ‘most ordinary, normal, typical’ single example of anything is a gross simplication.

All sets have variety, and the second major type of descriptive statistic tries to capture this variety, and do it in just one number.

The most common measure of variety - or technically ‘variability’, ‘variation’, or ‘dispersion’ - in a set of numbers is probably the standard deviation.

Box 2 provides an explanation of standard deviation - as equation, and also in everyday language.

Intiutively - not strickly - you can think of standard deviation as the average amount - as an absolute value (so negative become positive, and positive stay positive) - that each person’s value for a variable ‘misses’ (deviates) from the mean of the variable.

If the standard deviation is close to zero, then virtually everyone in the dataset has the same value for the variable.

If the standard deviation is large, then you expect that - on average - any particular person you pick from the dataset is going to be quite distant from (greater or lesser than) the mean.

1.3 Minimum/Maximum: The bounds of our data

Another important set of descriptive statistics of any variable are the minimum and maximum values.

In the world of practical statistics, these numbers are very important because they give a sense of the absolute limits of the values of a dataset.

There are two main reasons you want to know this:

This number tells you how many people actually answered this question.

This is useful for spotting variables that have large numbers of missing data, which would skew the data, or, again, some sort of data entry problem (such as coding as missing, people who didn’t answer a question, but who can be assumed to be a zero or 1, e.g. “How religious are you?” may not be asked to people without a religion. However, we know that that number is not really missing, it is just very low. How religious are people with out religion? It is pretty safe to assume that they are not very religious!)

Figure 1: The Population and The Sample

2.1 Population: The big bad world, hidden behind a curtain

2.1.1 Population parameter: The number we will never know

Population parameter – A measure (for example, mean or standard deviation) used to describe a population distribution. For example, the mean age of Australians.

2.2 Sample: The mini world we can really see and touch

2.2.1 Sample statistic: Our approximation of the real world

Sample statistic – A measure (for example, mean or standard deviation) used to describe a sample distribution. For example, the mean age of 500 Australians in a random sample

2.3 Hypothesis testing: How do I know if I am wrong?

2.3.1 Null hypothesis: The hypothesis that nothing is happening

Research hypothesis (H1) – A statement reflecting the substantive hypothesis. It is always expressed in terms of population parameters, but its specific form varies from test to test. It is also called as alternative hypothesis.

Null hypothesis (H0) – A statement of “no difference (or no relationship),” which contradicts the research hypothesis and is always expressed in terms of population parameters.

H1: There is a difference in the maximum height a rabbit and a cat can jump.

H1: Sydney has more expensive houses, on average, than Melbourne. 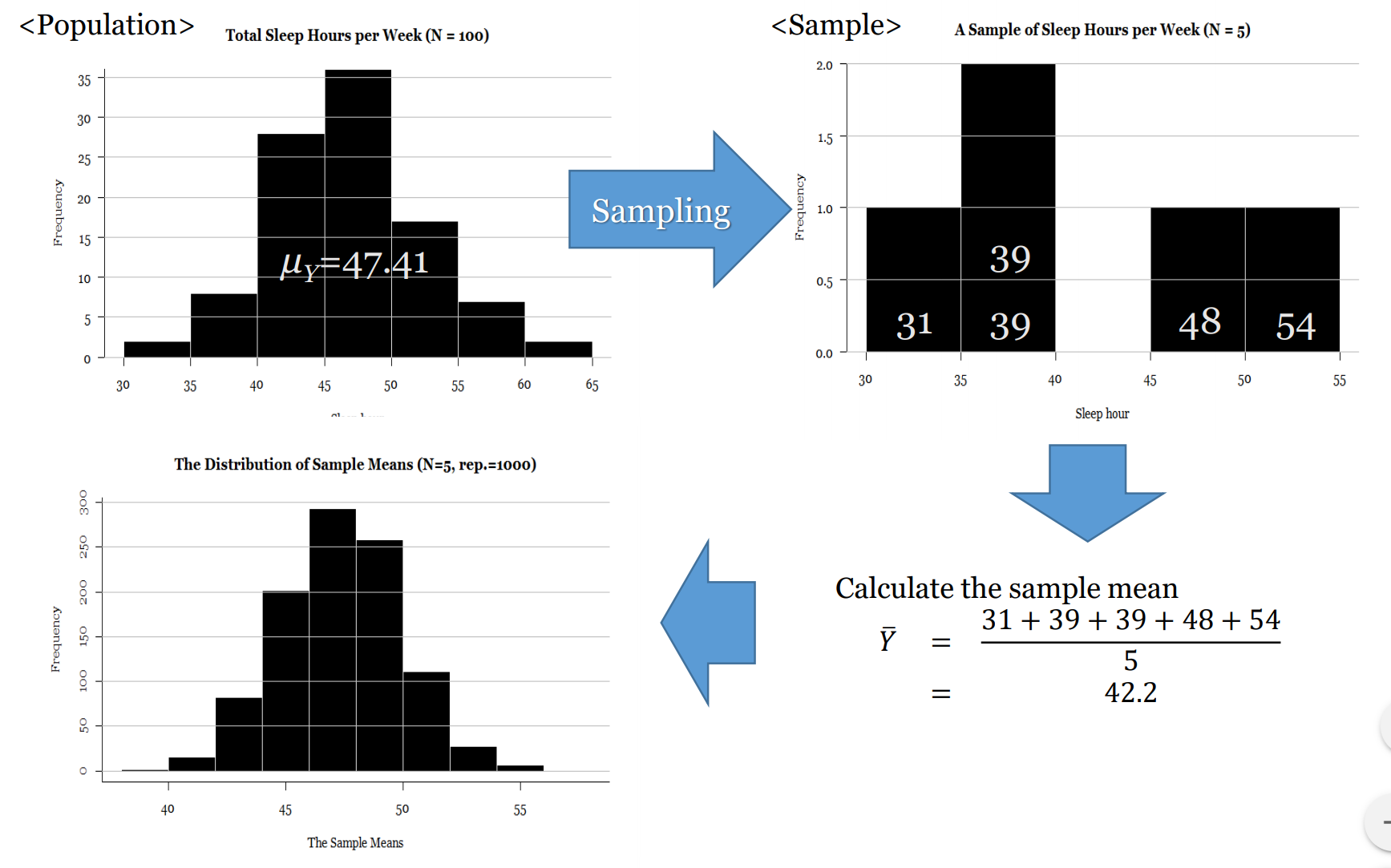 2.3.3 Central limit theorm: If you roll dice infinite times you always get 3.5 (on average)

2.3.4 Standard error: If I repeated this survey 1,000 times… the answer would vary this much (holds up hands pretending to have caught a big fish).

We call this last number - (the standard deviation of the population/square root of N) - the standard error. 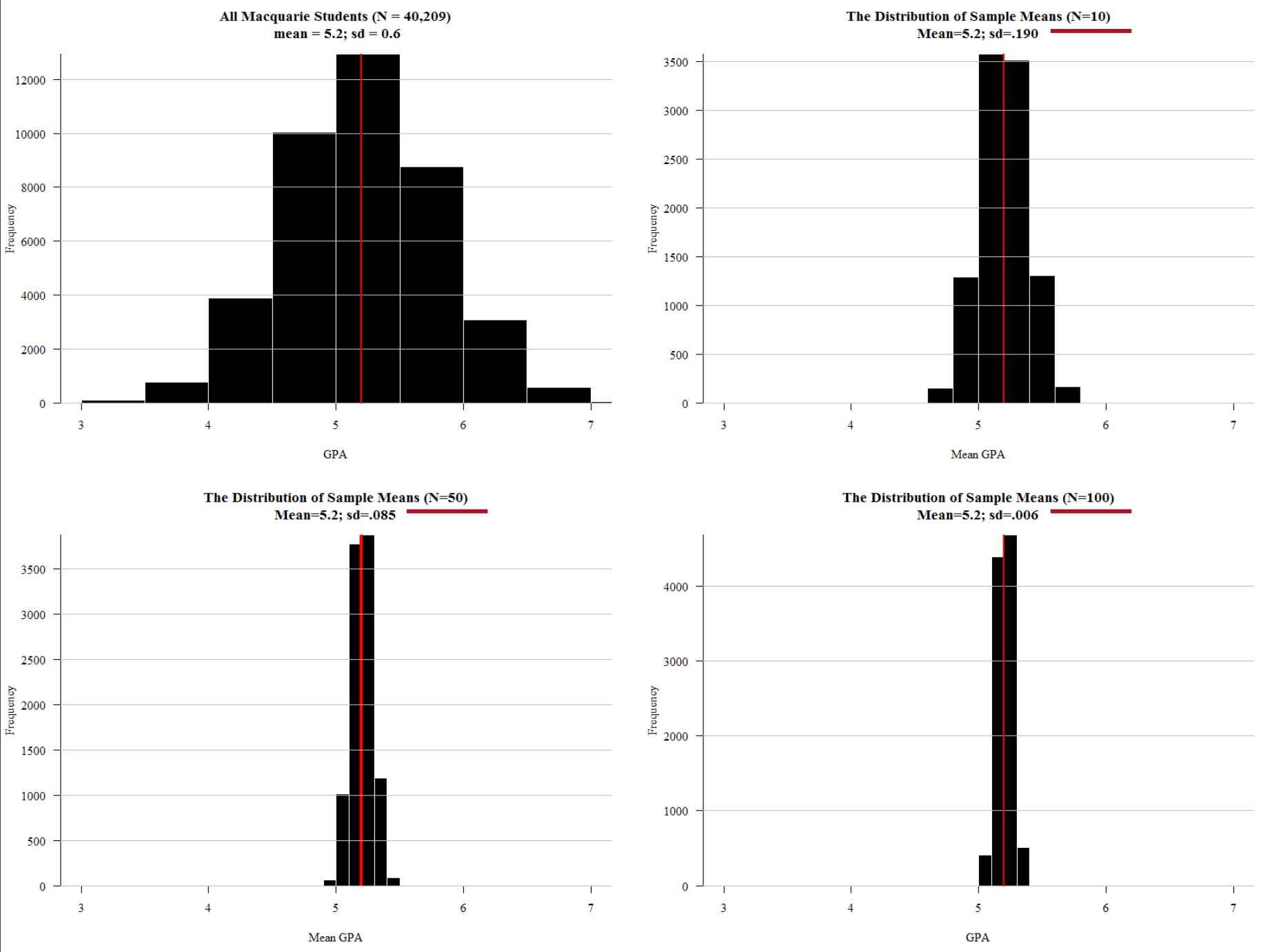 Figure 3: The standard error of a sampling distribution gets smaller as the sample size of each sample increases.

Implication: As the sample size gets larger, the standard error (standard deviation of sampling distributions) becomes smaller, which means that a larger sample can better represent the population and thus more accurately infer the parameter. 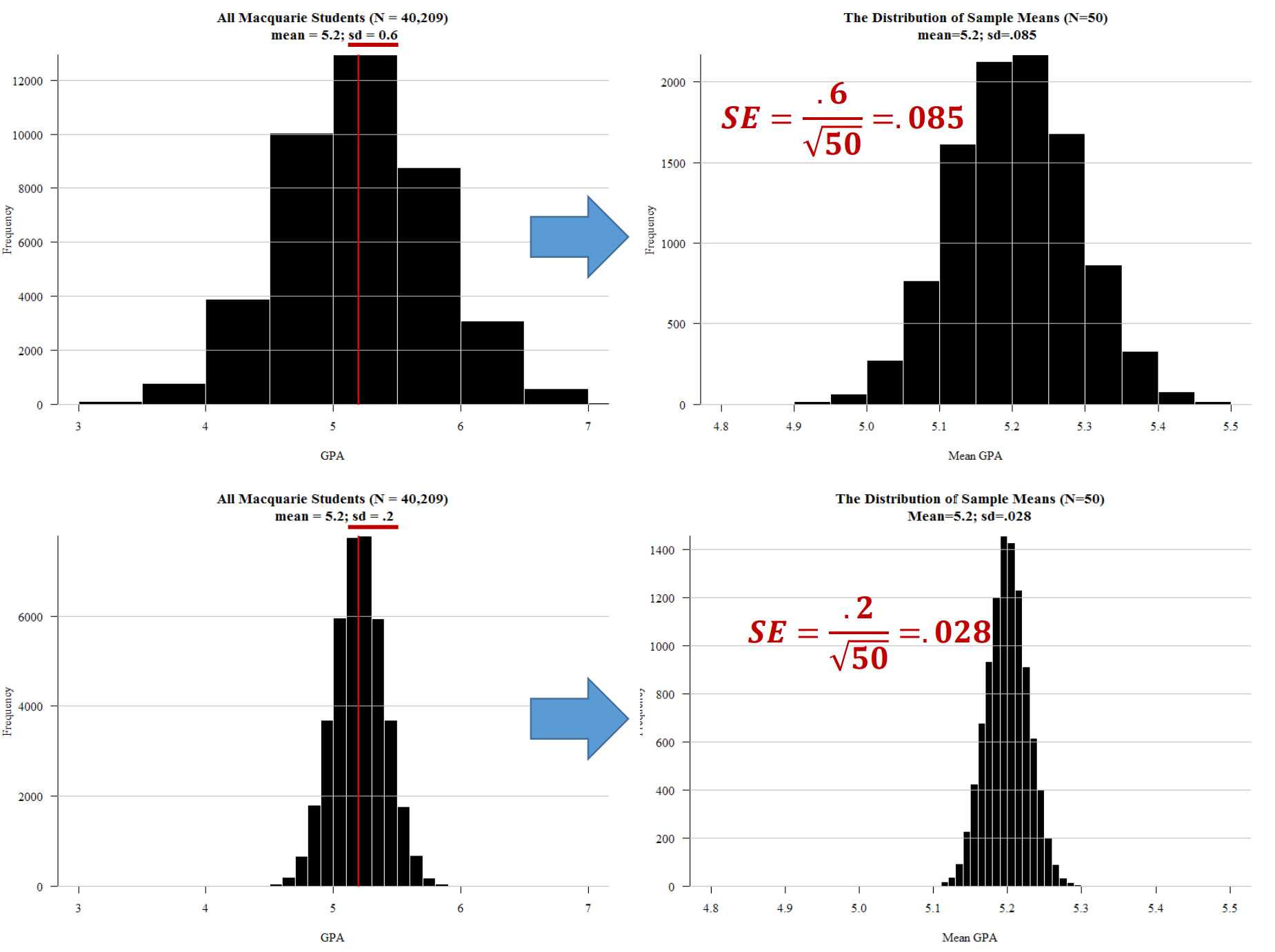 Implication: As the standard deviation of populations gets smaller, the standard error becomes smaller. When populations have smaller variances, the sample can better represent the population and thus more accurately infer the parameter.

2.3.5 Confidence interval: The population parameter is somewhere between here and here

Confidence Level: The likelihood, expressed as a percentage or a probability, that a specified interval will contain the population parameter.

Confidence Interval: The range within which we are confident (with a 90%/95%/99% certainty) that the population parameter lies within.

For a normal distribution:

2.3.6 p-value: the chance I’m wrong. The chance nothing is happening

p-value: The probably of obtaining the test statistic.

Since null_hypothesis is generally that nothing is happening, i.e. 0, then test statistic reduces to:

p-value for various levels of z-score:

Last updated on 04 May, 2020 by Dr Nicholas Harrigan (nicholas.harrigan@mq.edu.au)