0. Code to run to set up your computer.

Any model is only valid if the assumptions it is based on are true.

This is true for linear regression models too.

For each of these parts of the model, there are different assumptions.

In general, the assumptions that underly the coefficients are about the proper fit (or) otherwise of the coefficients to the sample (i.e. does the line estimating the relationship between the IV and DV pass through the middle of the points on a graph).

1.2 Assumptions about standard error of coefficent

In contrast, the assumptions related to the standard error are about the ability of the model to be generalised to the larger population: these tend to be about whether the standard errors properly reflect the likely variation (or non-variation) in the value of the population parameter.

For each of the various assumptions, there are three questions to ask

One basic ASSUMPTION of all models is that there are very few outliers. An outlier is a case (a unit of analysis - e.g. survey respondent) whose value on the outcome variable (dependent variable) is poorly explained by the explanatory variables (independent variables).

The reason outliers are a problem is that they show that the model is a bad explanation of the data. Basically it’s a bad model.

How do we TEST if we have outliers?

For example, say estimate a model of likelihood of voting (from 1 to 5) as predicted by political knowledge (measured from 0 to 10 on quiz).

Suppose that the estimated model is:

And suppose we have a person called “Tom” with:

Tom’s predicted likelihood_vote would be:

However, his actual likelihood is 1.

The unexplained part of Tom’s vote is

We call this unexplained part (2) of outcome variable the residual.

Outliers are identified by the fact that they have very large residuals.

And you will remember from previous classes the main way we standardise and create universal units is by dividing values by the standard deviation of those values so that a case with a value of 1 is is known to have residuals exactly one standard deviation away from the coefficient.

So the measure we use to TEST for outliers is standardised residuals.

We calculate the value of this on all the cases in our dataset, and then we look at the proportion of those that lie outside what you would expect to find by chance.

And how do we do that? We look to see how many have standardized residuals that are different from those expected in a normal distribution.

And this test is quite straightforward.

Let’s look at how we do this in R

First we need to run a model. In this case we run a simple model of political knowledge, with one predictor: interest in politics.

If you want to see this model’s coefficients, then you can run:

Next we construct a new data frame which will hold the variables from our model.

I’ve given it the name ‘diagnostics’, but you could call it anything.

You can view this data frame by double clicking on it in the top right corner of your RStudio window.

Next we want to put the main residuals into the new data frame. The most important of these is the third set - the standardised residuals

Now we need to run the tests.

How many cases is 5% of cases in your dataset?

We can just measure the length of a variable to get the number of cases in our dataset and then multiply that by 0.05

?o how many cases in our dataset have an absolute value of the standardised residual of > 1.96:

We can repeat this with the other two tests

“No more than 1% of cases with absolute value of standardised residual of greater than 2.58”.

“No more than 0.1% of cases with absolute value of standardised residual of greater than 3.29”.

While outliers are cases that are not explained by a model, influential cases are those that disproportionately effect the coefficients of the model.

We can think of the influence of an individual case (e.g. one person who does our survey) by asking how much does the coefficient for a predictor variable in a model change when this one case is dropped out of the dataset.

There are many different measures of influential cases, and it is beyond this course to explain how these are calculated and exactly what they mean. For our purposes, the key things to understand are (1) what tests we should run; and (2) how to judge whether our model passes these tests or not. In addition we may want to be able to answer (3) what should we do if our data fails the test.

The two measures of influential cases we are going to look at are:

Cook’s Distance is calculated on all cases (e.g. respondants) and a case is considered a problem - i.e. too influential - if it has a Cook’s Distance greater than 1.

Leverage is also calculated on all cases.

There are different rules of thumb about what level of leverage is problematic.

The various measures of influential cases can be calculated and stored with the following commands:

We can then check the maximum Cook’s Distance (which should be > 1) with this command:

And then we can check that the maxmimum leverage is below the prescribed level of:

MAX LEVERAGE IN THIS DATA:

Another problem which a model can have is that the predictor variables (independent variables) are highly collinear.

Some level of collinearity is to be expected. However, when the correlation between variables is extreme - like 0.8 or 0.9 or higher - then this collinearity can undermine the quality of a linear regression model.

The main way that we check for multicollinearity in a regression model is with the Variance Inflation Factor (VIF) (and it’s inverse, which is called Tolerance).

The rule of thumb is that the highest VIF for any coefficient in the model should be less than 10, and ideally less that 5 or even 2.5.

The VIF for each variable in a model is given by this command:

if you don’t want to read and look for the maximum VIF, then you can use this command and check that the results is below the threshold of 10 (or more conservatively 5).

And you can check the mean VIF with this command:

Below I’ve simply pasted the two linear regression models, and then run the three diagnostics. Remember that the maximum VIF should be below 10, and ideally below 5 or even 4. Run the code and interpret the results.

Why does this matter?

It matters because when there is heteroscedasticity (i.e. not homoscedasticity), the variance - and therefore standard errors - are underestimated, making inference from the model to a population unsound.

The simplest way to test for homoscedasticity is to use a built in function in R, where you simply call the command ‘plot()’ and place the regression model data in the function.

Note that when you run this command, R will say to you in the console window: 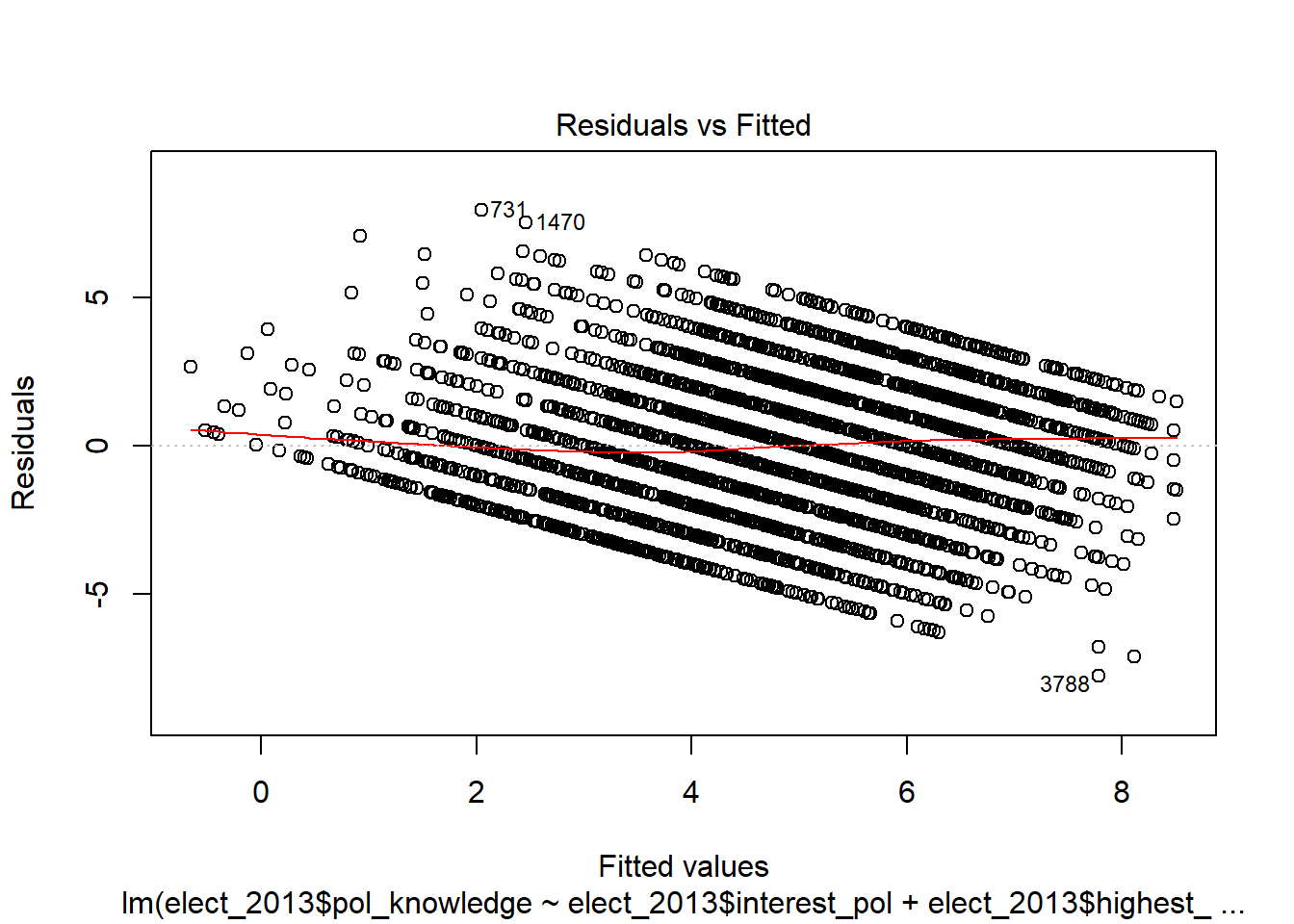 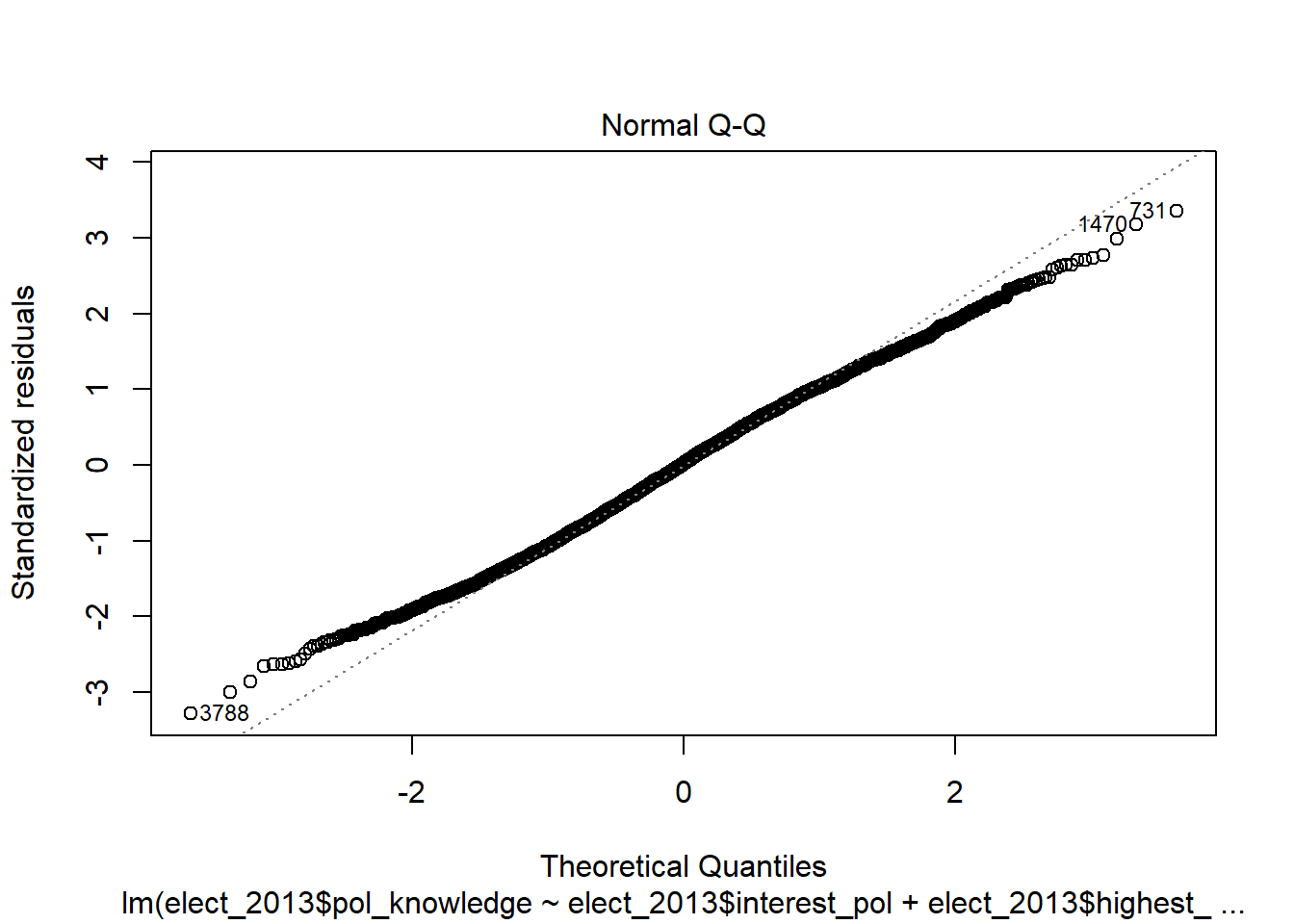 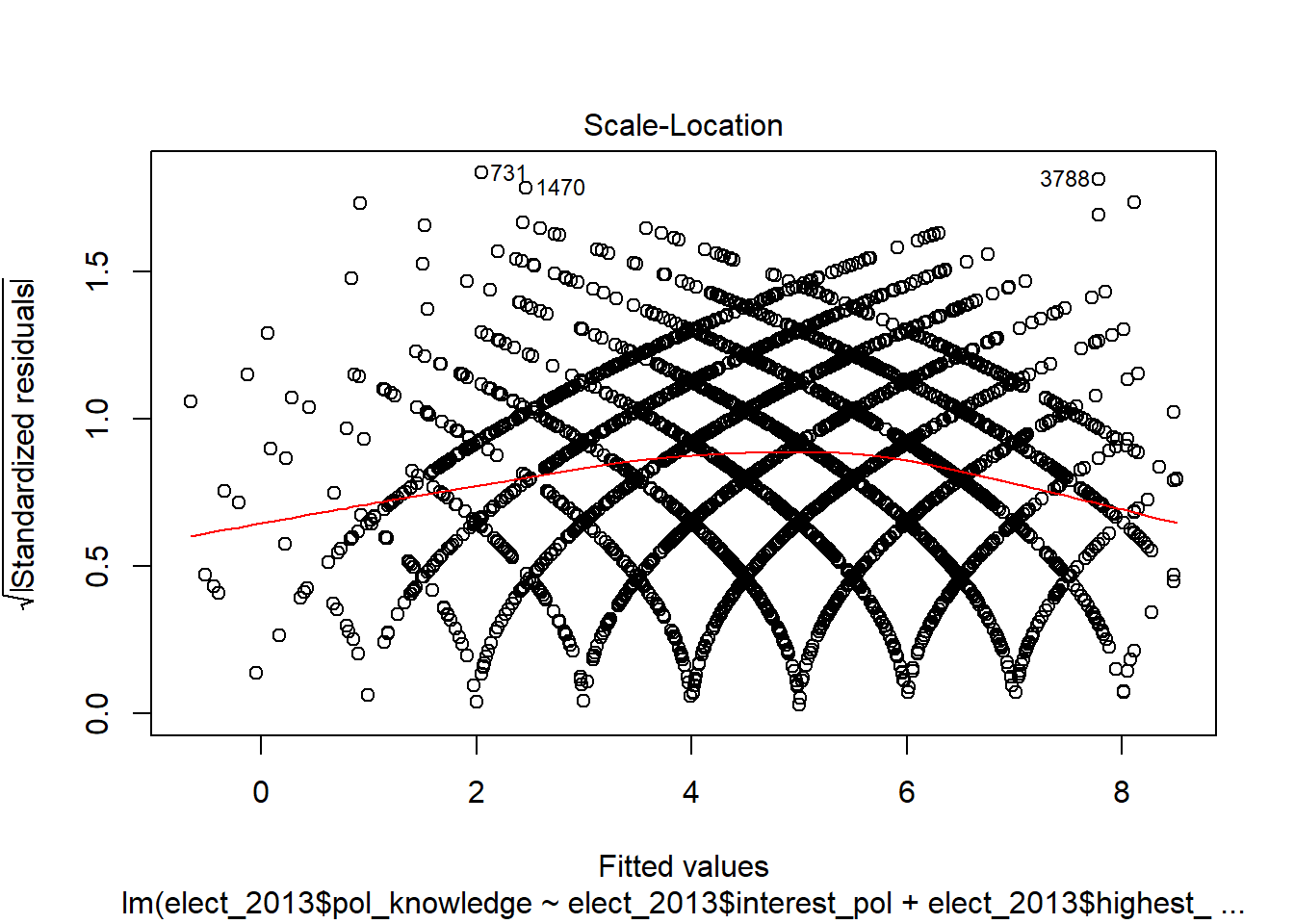 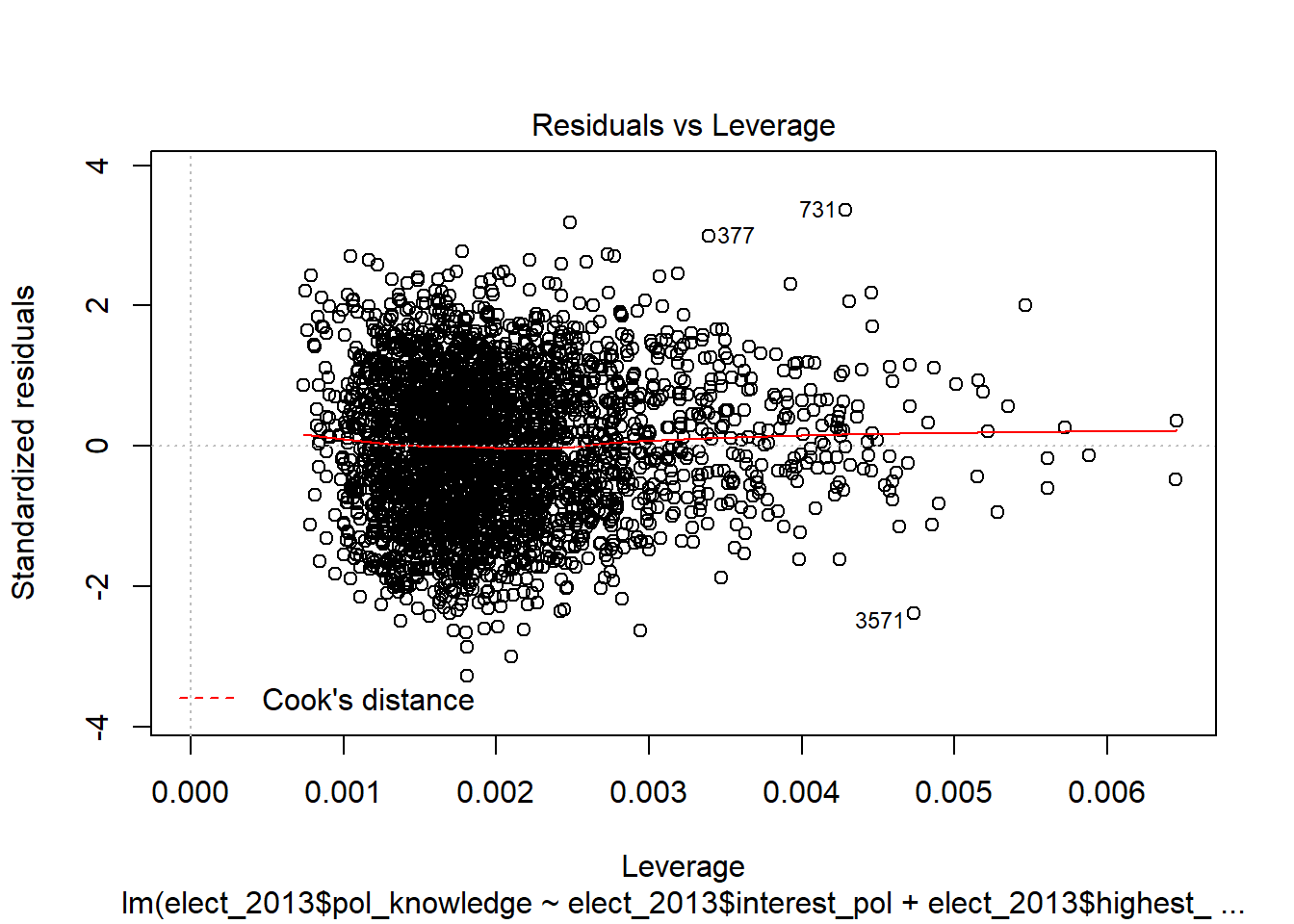 This first plot is the most important. It is the plot of the residuals against the fitted values of the dependent variable.

The general advice for evaluating this plot is that the values should be evenly distributed across the different values of the fitted values.

In practice, the plots which one sees are often hard to evaluate - especially for someone who is not an expert and experienced regression modeller and statistician.

In general I would recommend running this test and then referring to the textbook (Field et al. 2012: section 7.9.5), and websites such as this:

Another assumption we can test is independence of errors. This is not normally a problem unless one has samples on the same people (e.g. in time series data) or some strong sequencing effect caused by sampling (e.g. you sample people who are friends or who are living in close geographic proximity).

A test for independence of errors is the Durbin Watson Test. The statistic for this test should be more than 1 and less than 3, and the p-value for the test should be greater than 0.05.

This is the command for running the D-W Test. Remember that the D-W Statistic should be between 1 and 3, and the p-value of the test should be greater than 0.05.

We have already tested some aspects of the normal distribution when we tested for outliers (2.1).

However, a lack of outliers is only one aspect of a normal distribution. A distribution could - and often does - lack outliers but still not be normal. It could be, for example:

In our case, we are not looking at a variable directly but rather the residuals of a variable. Nonetheless, the distribution of residuals has the potential, like any distribution, to not be normally distributed in many different ways.

The test we apply is rather rough, but is essentially: Does it look like a symetrical bell curve, centred on a standardised residual of zero?

If the answer is yes - more or less - then we are generally satisfied that the assumption holds.

There are more advanced tests - for measuring skewness, for example - but these are generally not used unless there is a very specific reason.

What do we visually inspect the standardised residuals? The command is simply: 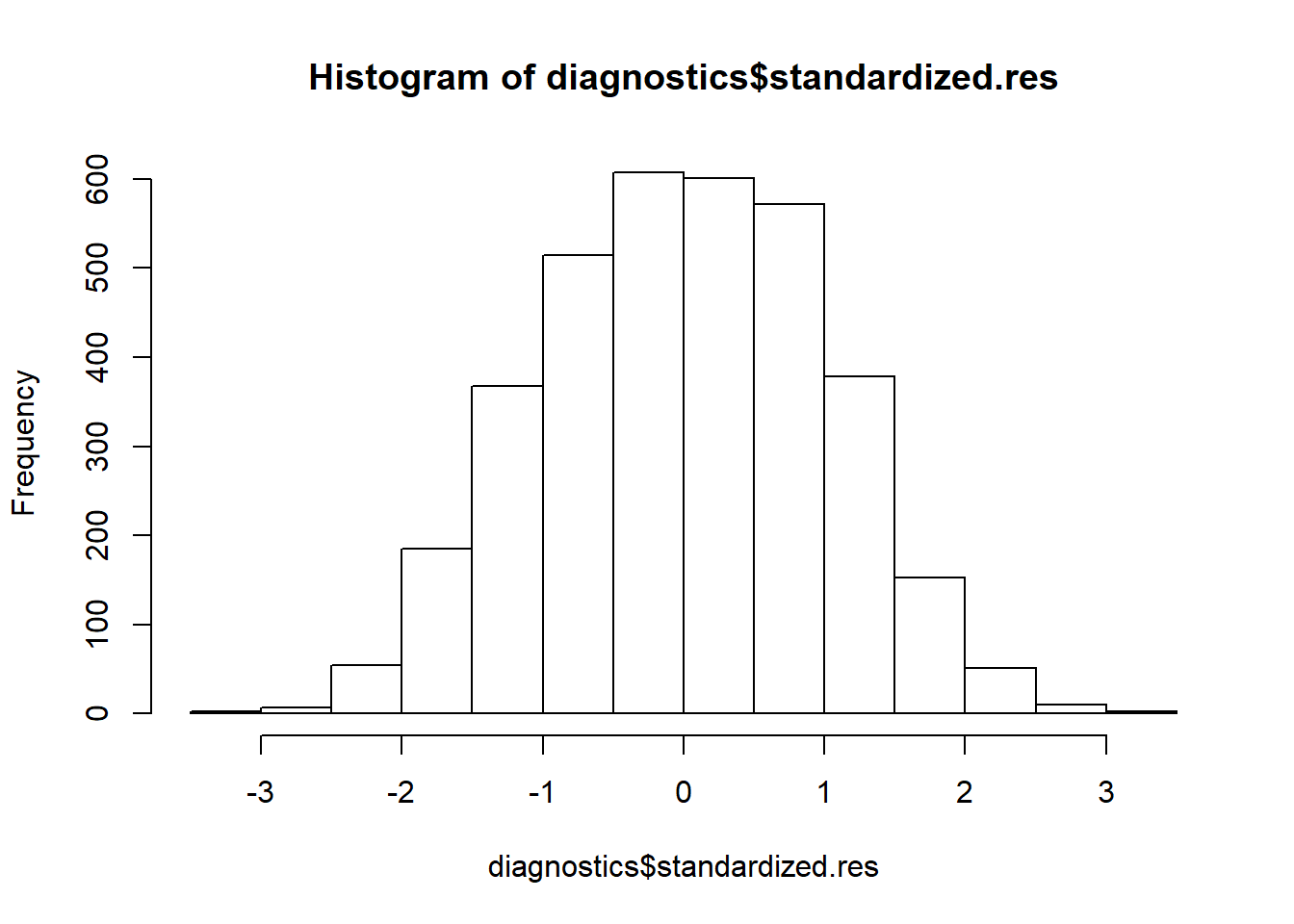 In this case the residuals look normally distributed

However, we can come up with an example that violates this assumption of normality. Run the following code and inspect the standardised residuals. 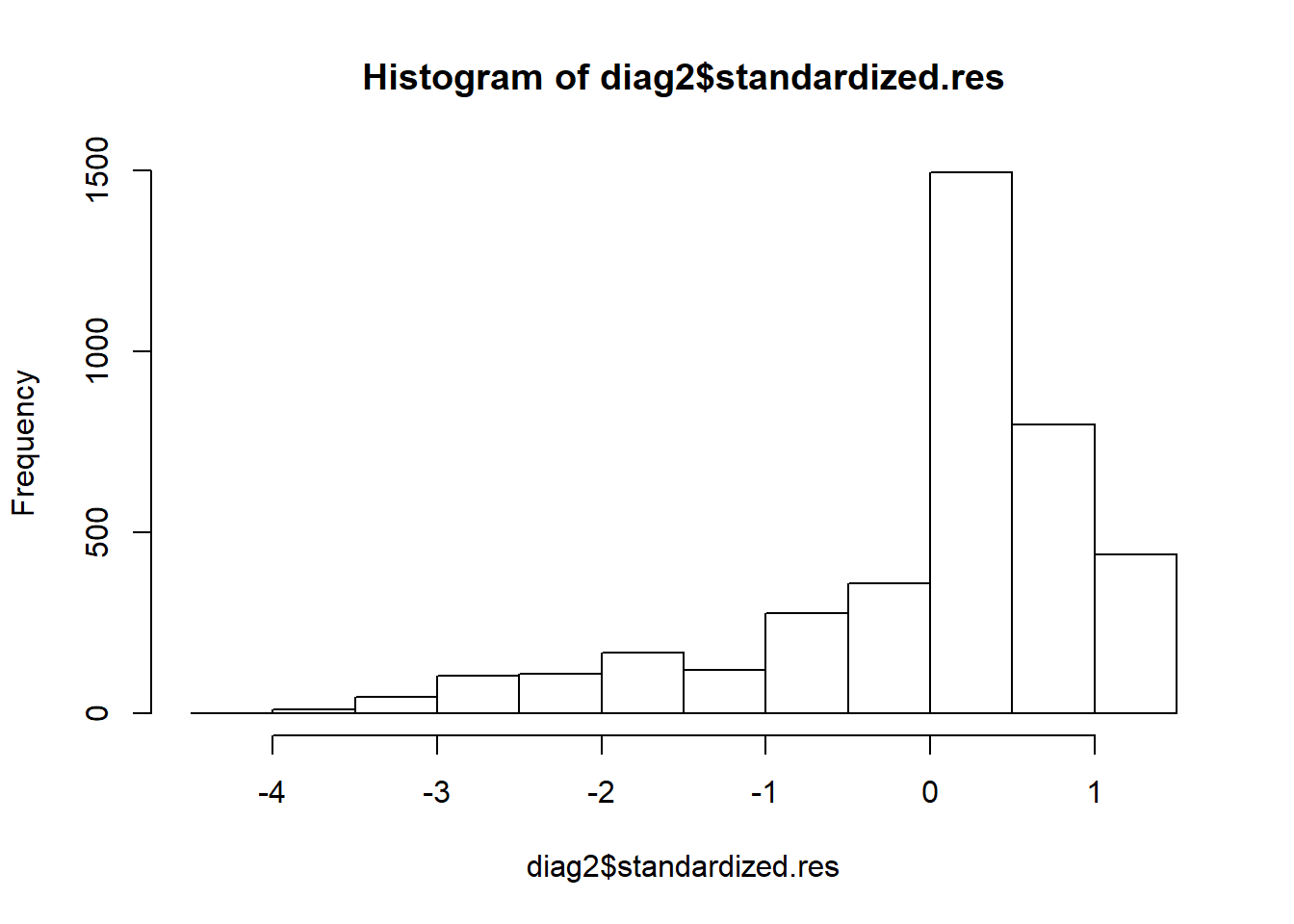 The visual inspection of the histogram shows a serious problem with skewness. One reason this happens because the dependent variable - likelihood_vote - is so skewed. Regardless, the point here is that there are models which fail this test.

2.7 What to do when assumptions are violated?

What do we do if our data or model violates one or more of these assumptions?

There are lots of different techniques and tricks that can be used to address these problems. I will try to list some of the most common here:

Applying all these techniques is beyond this week’s class, but we will deal with many of these ideas over the course of the semester.