We generally use linear regressions when we have

The unstandardized coefficients for each independent variable - also called B - can be read as:

The process of running a regression in SPSS is relatively straight-forward.

When you read your results from a regression, there are two main columns you read:

You can ignore all coefficients for which sig. > 0.05. Coefficients where the sig. < 0.05 are interpreted as:

The important thing to remember when reporting results, is that you only report the necessary information, and you want to keep it simple and clear. Don’t cut and paste screenshots from SPSS.

(a) Forced Entry of independent variables 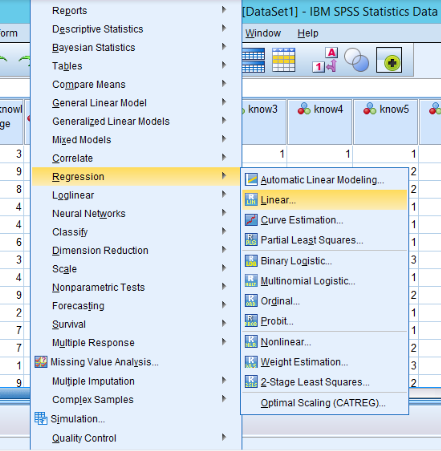 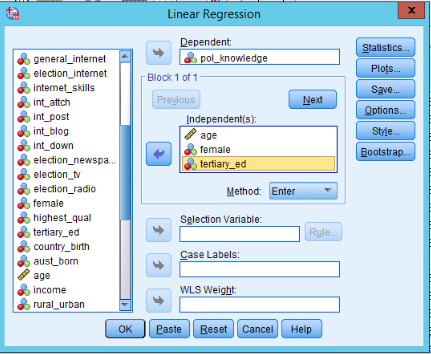 (b) Heirarchical entry of independent variables 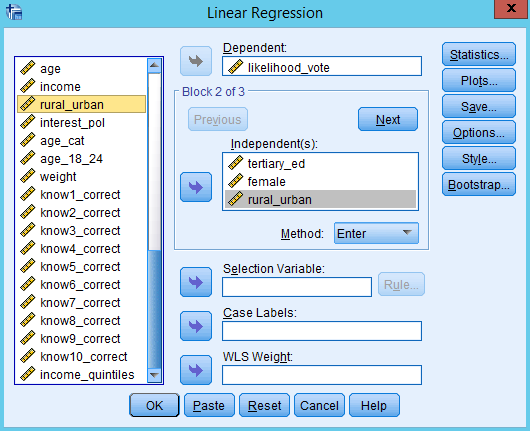 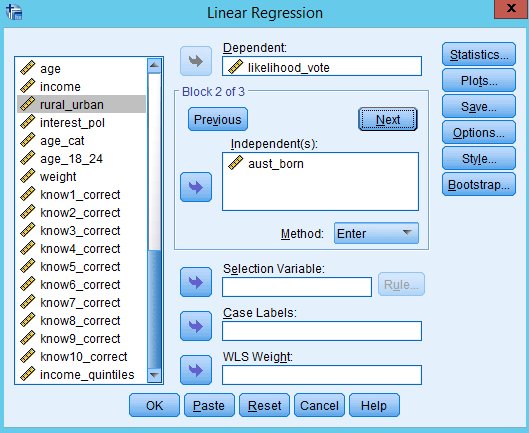 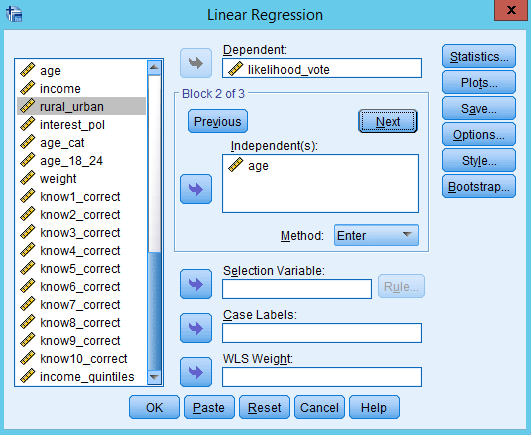 The simplest way to think about it is that each of Model 1, Model 2, and Model 3 are completely separate FORCED ENTRY models.

The coefficients for each variable in the three models are interpreted as ‘controlling for all the other variables in the model’. The difference with the later models (like Model 3) is that there are more controls (and more variables with coefficients).

So how would we interpret this set of models?

‘Women are more likely to vote (if voting was not compulsory) than men, but the reason this dataset shows this is that the male sample group is skewed towards a higher age than the female group (you can see this by doing a paired t test of age by gender or by comparing the historgram of age by gender). As people get older, they are less likely to vote (if voting is not compulsory). When controlling for the age of the respondents, gender is no longer statistically relevant. So women are more likely to vote but only because they are younger (in this sample).’ 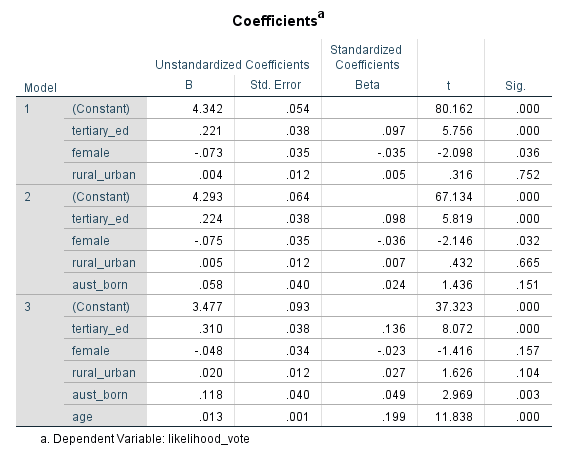 WARNING: YOU SHOULD PROBABLY NOT BE RUNNING A STEPWISE REGRESSION WHY? BECAUSE THEY ARE A-THEORETICAL, AND SO PRONE TO MASSIVE CONCEPTUAL FLAWS.

Let me show you through an example: 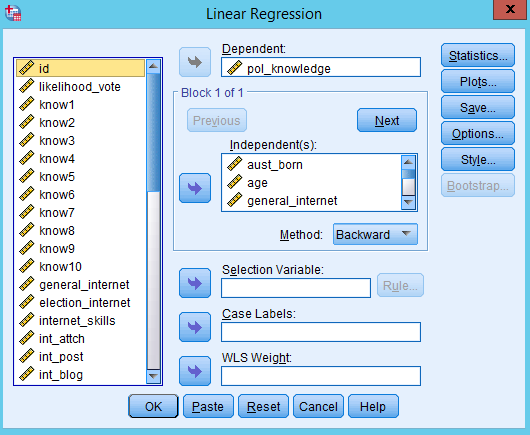 This will reveal the options for ‘Stepping’. Because we are doing ‘Backwards selection’, you can just look at the ‘Removal’ box. Variables with Significance (p-value) greater than 0.10 will be removed from the model, one at a time. If you want you can adjust this up or down. Press ‘Continue’. Then press OK and run the model 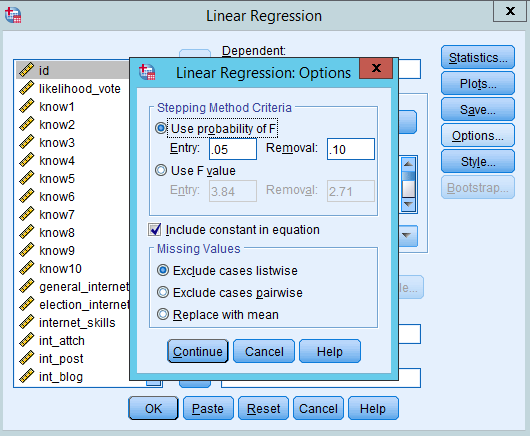 First you need to wade through the huge mass of output.

The way a stepwise backwards selection regression works is that SPSS estimates a complete model with all the variables, and then if any variables have a significance of greater than 0.10, then it removes the one with the highest p-value (i.e. the least significant variable is removed). It then re-estimates the model, and repeats this process until only variables with p-values < 0.10 are left.

So generally we interpret a STEPWISE model by just interpreting the LAST model as a FORCED ENTRY model.

Here is the last model for our example. Notice the 3 next to the word (Constant). This is the model numbers, and this means that the method has dropped out 2 variables before getting to the final model. Dependending on how many variables you put in and their statistical relevance you could go through dozens of models.

So how would we interpret this set of models?

The Australian born variable was excluded in the first model because it had a p value over 0.10. But as we saw in the hierarchical model we did previously, the Australian born variable is interacting with other predictor variables. By running the hierarchical linear regression we were able to isolate that relationship, however in this stepwise regression method we are not able to to this.

THIS IS THE PROBLEM WITH STEPWISE MODELS: THEY DON’T DO THE THINKING FOR YOU, AND IF YOU GIVE IT SILLY MODELS, IT WILL STILL RUN THEM.

The key thing to say here is: DO NOT JUST CUT AND PASTE THE TABLES FROM SPSS INTO YOUR PAPER OR PRESENTATION.

You need to be selective about what you present, and you need to make it look neat and nice!

I am going to set a rule for what I want to see. I only want to see: * B coefficients * Sig./p-values * The number of cases in your sample (n) * The R-square for your model

Here is an example of a table of the models produced by the hierarchical method.. 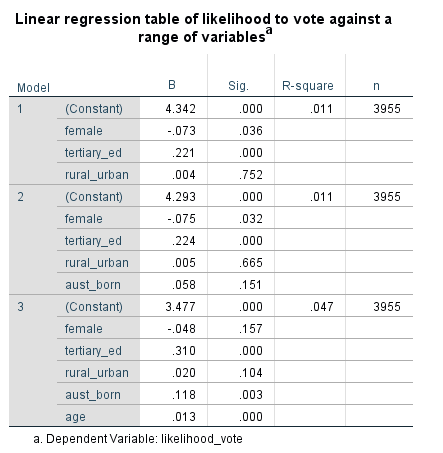